Chanel Beckenlehner from Caledon, Ontario was crowned Miss Universe Canada 2014 on Saturday May 24th 2014 in Toronto competing against more than sixty other women and will represent the North American country in the Miss Universe later on this year. Beckenlehner currently attends the University of Toronto where she studies political science and describes herself as a down to earth, positive and approachable person.

She had been already a Top 12 semifinalist in 2009 of the Miss Universe Canada and even won the Miss Elegance and voted as the Audience Favorite. This woman who constantly works with charitable organizations standing 5’8″ high, was already a semifinalist in a Grand-Slam Pageant, Miss International 2009 placing on the 6th spot.

Experience in beauty pageants is one of Chanel's key assets.

"I am thrilled to say that I am Miss Universe Canada 2014!" Beckenlehner posted on her Facebook page on Sunday.

In Miss Universe's Canada website the twenty-six year-old and fluent in English and Spanish (conversational) is depicted as "a natural in front of the camera or on stage, one of her ambitions in life is to pursue an entertainment career, particularly as a television presenter". Also they state the importance for her of winning the crown, "obtaining the title of Miss Universe Canada would allow Chanel to bring attention to important issues around the world, especially those that involve women and children".

After her coronation, the Caledon native said: "Thank you very much for your support, encouragement and positive energy. My dreams became a reality last night and I am so excited to work hard this year. Thank you to my sponsors, friends and family for being so supportive. A special thank you goes out to the best pageant coach, Lu Celania Sierra! Let's go rock Universe Canada!"

"I live a very active lifestyle; working out, riding horses and golfing are activities I engage in regularly".

During the gala were given Special Awards such as the Miss Photogenic to Kesiah Papasin from Ontario; Best Hair to Lauren Howe, a Toronto native and Miss Congeniality for Shayla Sabbagh from Vancouver. The first runner-up of the pageant was Kesiah Papasin, followed by the second runner-up Lauren Howe and the third runner-up Sarah Harrison from Halifax; to wrap up the finalists group the fourth runner-up was Nicole Lacz from Milton. 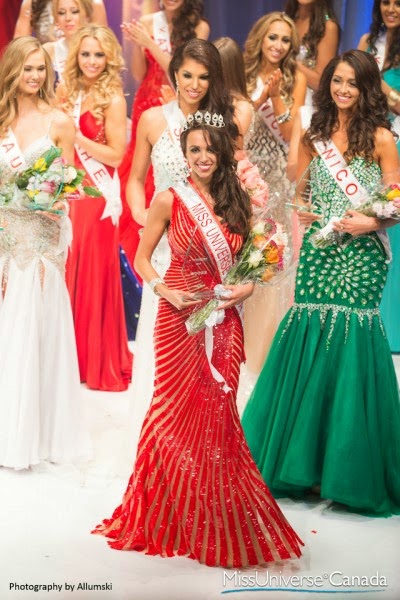 The new Miss Universe Canada 2014 moments after being crowned.